When the COVID-19 experience began now 7 months ago, I sat and thought deeply about the repercussions of this new precedence. This level of lockdown for a virus that has NEVER been close to the Imperial Model that estimated 2.2 Million deaths in the US.

Again, it doesn’t take a long and hard thought to see the many inconsistencies plaguing our current narrative from the mainstream media and our public health officials.

Most people have never considered that masks are clearly shown to do relatively nothing to prevent viral transmission.

Most people don’t recognize that this model included social distancing and masks.

Most people don’t recognize that the way that we are counting COVID-19 deaths is vastly different from how we’ve ever counted deaths from infectious illness. (example: people are who are dying of chronic illnesses are being counted as COVID-19 deaths)

More than 75% of the deaths in the United States are from nursing homes and when we look at the states which mandated patients who tested positive for COVID would have to be accepted at nursing homes.

Does this inflate the numbers?

Does this inflate the fear driven by our mainstream media?

Why is it that they are reporting about cases and have completely stopped reporting deaths?

Again, if we were dealing with a truly pandemic level vector zero containment, I’d be all for any measure just to stop it. But we aren’t.

This virus looks more like the cold and flu, but it’s really special in that it doesn’t affect young people and anyone outside the risk group as severely.

So what does this have to do with the flu?

This has everything to do with the fact that for months now, the mainstream media and the public health officials have been recommending everybody get the flu shot. They’re telling you it’s going to help protect you and your family from coronavirus, but I want you all to know the data is very clearly the opposite.

You are actually far more contagious and vulnerable to COVID-19 with the flu shot than without. If that isn’t a reason enough, please allow me to provide you with some more data which shows not only are flu vaccines the most dangerous of vaccines (have never been tested against an inert placebo in a long-term, randomized controlled clinical trial), they are marginally effective and they do, in fact, make you more vulnerable to COVID-19 and other respiratory illnesses.

Here are 9 facts about the flu vaccine you more than likely have not heard about:

1. The flu vaccine increases the risk of contracting non-flu respiratory illness by 65%.

In a study in the journal Vaccine, funded by the CDC, researchers found that in the 14 days window after a flu vaccine, study subjects had a 65% more likelihood of contracting a non-flu respiratory illness.

“This is important because although flu vaccines target three or four strains of flu virus, over 200 different viruses cause illnesses that produce the same symptoms—fever, headache, aches, pains, cough, and runny nose—as influenza, and more than 85% of acute respiratory illnesses do not involve the flu.”

“The National Institute of Health (NIH) funded a study to measure the effect of seasonal influenza vaccination on hospitalization among the elderly. The study analyzed 170 million episodes of medical care and found that “no evidence indicated that vaccination reduced hospitalizations.””

A 2018 Cochrane review of 52 clinical trials, flu vaccine did not make a significant difference in reducing hospitalizations. Instead, the reviewers found that time off and hospitalizations were comparable between vaccinated and unvaccinated.

3. The flu vaccine doesn’t prevent the spread of the flu.

“As such, the CDC funded a study of 1,441 participants, both vaccinated and unvaccinated, in 328 households. The study evaluated the flu vaccine’s ability to prevent community acquired influenza (household index cases) and influenza acquired in people with confirmed household exposure to the flu (secondary cases). Transmission risks were determined and characterized. In conclusion, the authors state: “There was no evidence that vaccination prevented household transmission once influenza was introduced.””

4. The flu vaccine fails to prevent the flu about 65% of the time.

“CDC monitors vaccine effectiveness annually through the Influenza Vaccine Effectiveness (VE) Network, a collaboration with participating institutions in five geographic locations… [A]nnual estimates of vaccine effectiveness give a real-world look at how well the vaccine protects against influenza caused by circulating viruses each season.” 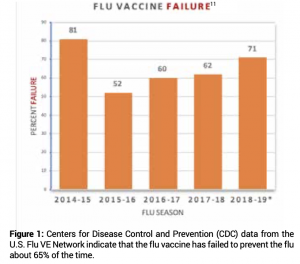 6. Death from influenza is rare in children.

Before the widespread use of the influenza vaccine in children, between 2000 and 2003, each year kids age 18 and younger had about 1 in 1.26 million or 0.00008% chance of dying from the flu. In a 2004 report, the CDC stated, “Deaths from influenza are uncommon among children with and without high-risk conditions.”

7. The flu vaccine doesn’t reduce deaths from pneumonia and flu.

“The National Vaccine Program Office, a division of the U.S. Department of Health and Human Services (HHS), funded a study to examine flu mortality over the period of 33 years (1968–2001). The study found that there has been no decrease in flu mortality since the widespread use of the influenza vaccine.

The authors state: “We could not correlate increasing vaccination coverage after 1980 with declining mortality rates in any age group… [W]e conclude that observational studies substantially overestimate vaccination benefit.”

8. Patients don’t benefit from the vaccination of healthcare workers

“A review of more than 30 influenza vaccine studies conducted for the Cochrane Library states, “Our review findings have not identified conclusive evidence of benefit of HCW [healthcare workers] vaccination programs on specific outcomes of laboratory-proven influenza, its complications (lower respiratory tract infection, hospitalization or death due to lower respiratory tract illness), or all cause mortality in people over the age of 60.””

9. Flu vaccine mandates are not science-based.

“A Cochrane Vaccines Field analysis evaluated studies measuring the benefits of flu vaccination. The analysis, published in the BMJ, concludes: “The large gap between policy and what the data tell us (when rigorously assembled and evaluated) is surprising… Evidence from systematic reviews shows that inactivated vaccines have little or no effect on the effects measured… Reasons for the current gap between policy and evidence are unclear, but given the huge resources involved, a re-evaluation should be urgently undertaken.””

*** All quotes are from the Physicians for Informed Consent Vaccine Risk Statement found here.

In the end, it is all about informed consent. If you have followed us for some time or are a patient of ours, you know, we have no attachment to the decisions you make. We only hope to empower you with the best information possible so you can make more educated decisions.

Informed consent is how we maintain our freedom from coercion and oppression from the medical/pharmaceutical/public health system. When there is data on both sides, there must be choice.

From the very beginning, we are very much supportive of the physiological fact that your ‘mask’ within is far superior to any external intervention you may choose for you or your family. The wisdom within can be measured, and therefore enhanced with natural means– especially chiropractic, of course.